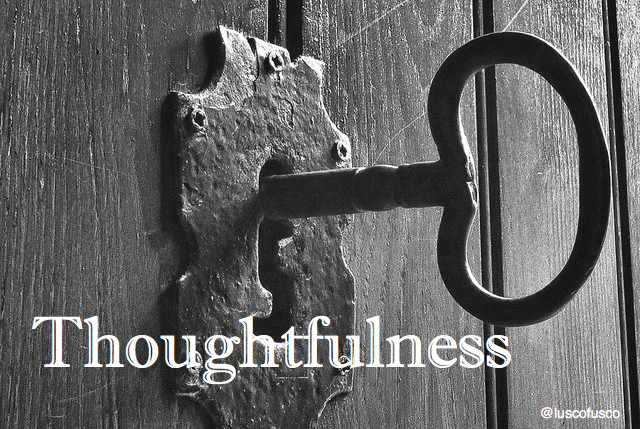 My district’s technology levy passed two years ago.  If I were to tell you our story, it would start with technology professional development becoming a commitment for the district and a strong infrastructure foundation being established.  This professional development work started with language being negotiated into the teacher contract and a dedicated technology integration TOSA being hired.  A full department and district assessment by a qualified consultant led the infrastructure improvements. Two years later, my teachers have access to monthly in-house and online technology offerings and every school has been rewired and wireless access has been expanded and improved. This is the groundwork that led to the lesson I completed as my individual project in EDTC 6102.  The goal of the lesson was to create a district technology integration vision statement.

The learners, my Technology Committee teachers, reflected on the current level of technology access in the district at the start of the lesson.  Through a buzz session discussion kicked off by the video 24 Hours in the Life of a Digital Native, consisting of teachers at different grade levels from different school buildings, they discovered that their access and use was similar and also very different from colleagues.  For example, elementary teachers learned that all social studies and ELA teachers 6-12 have their own designated carts of computers.  This is a level of access most elementary teachers do not have.  This created a vision for equity of access.

During the GoFormative activity, which focused on an attention article by Lizette Borreli (2015), learners confirmed that they are seeing these same shifts in paying attention in their students and themselves. 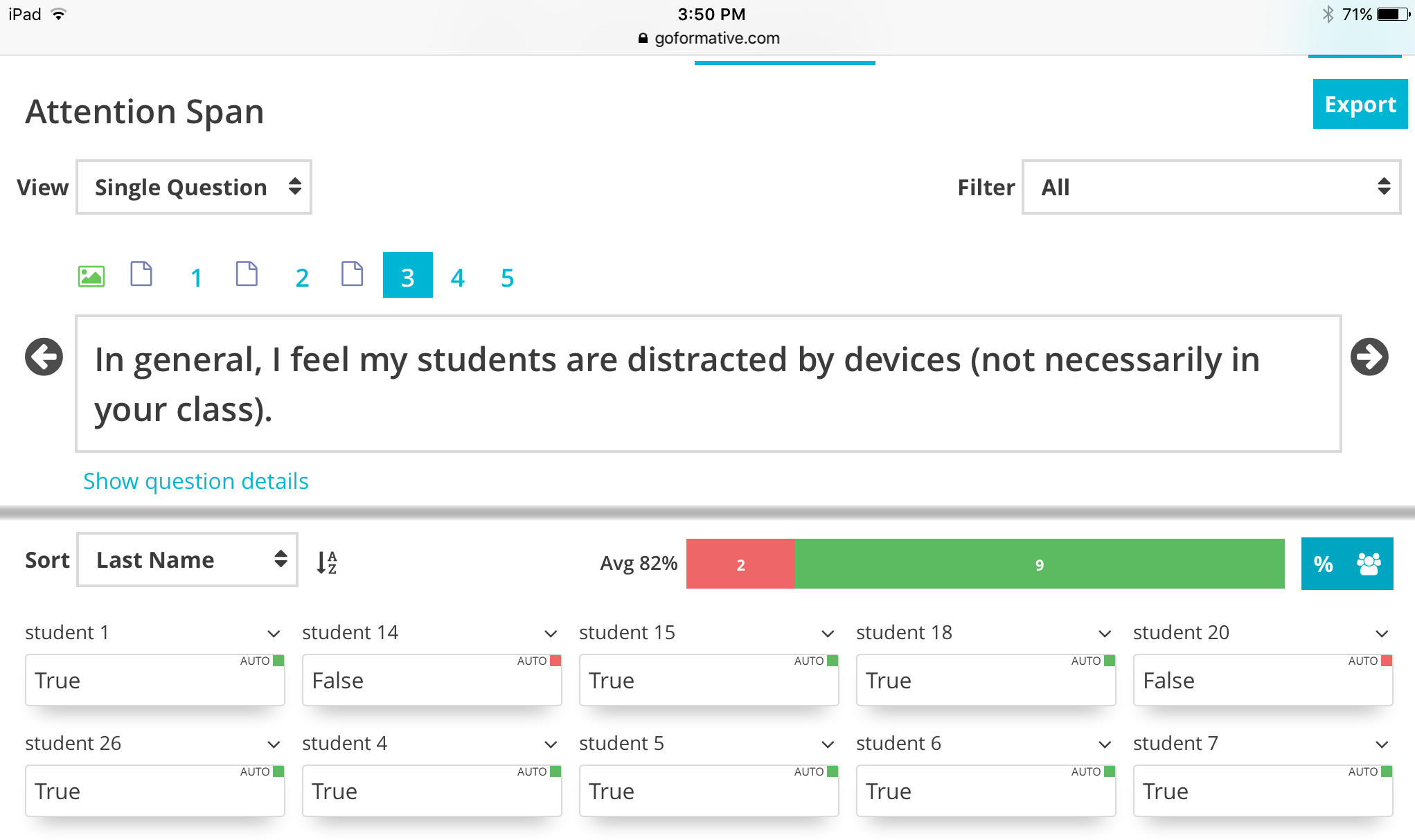 Live feed of individual responses, as well as a percentage scale of the group’s responses.

Much discussion outside of the tool erupted after the teachers had completed the reading and the live results of everyone’s responses were shown on the public projection screen.  This caused the session to take longer than the time frame provided, but that was not surprising.  If I do this again, I will allot more time.  As this portion of the lesson wrapped up, participants were discussing and sharing from personal experience best practices that maximize learning and minimize distraction when using technology in the classroom.  This went so far as a discussion of whether tools to lock down devices are necessary. 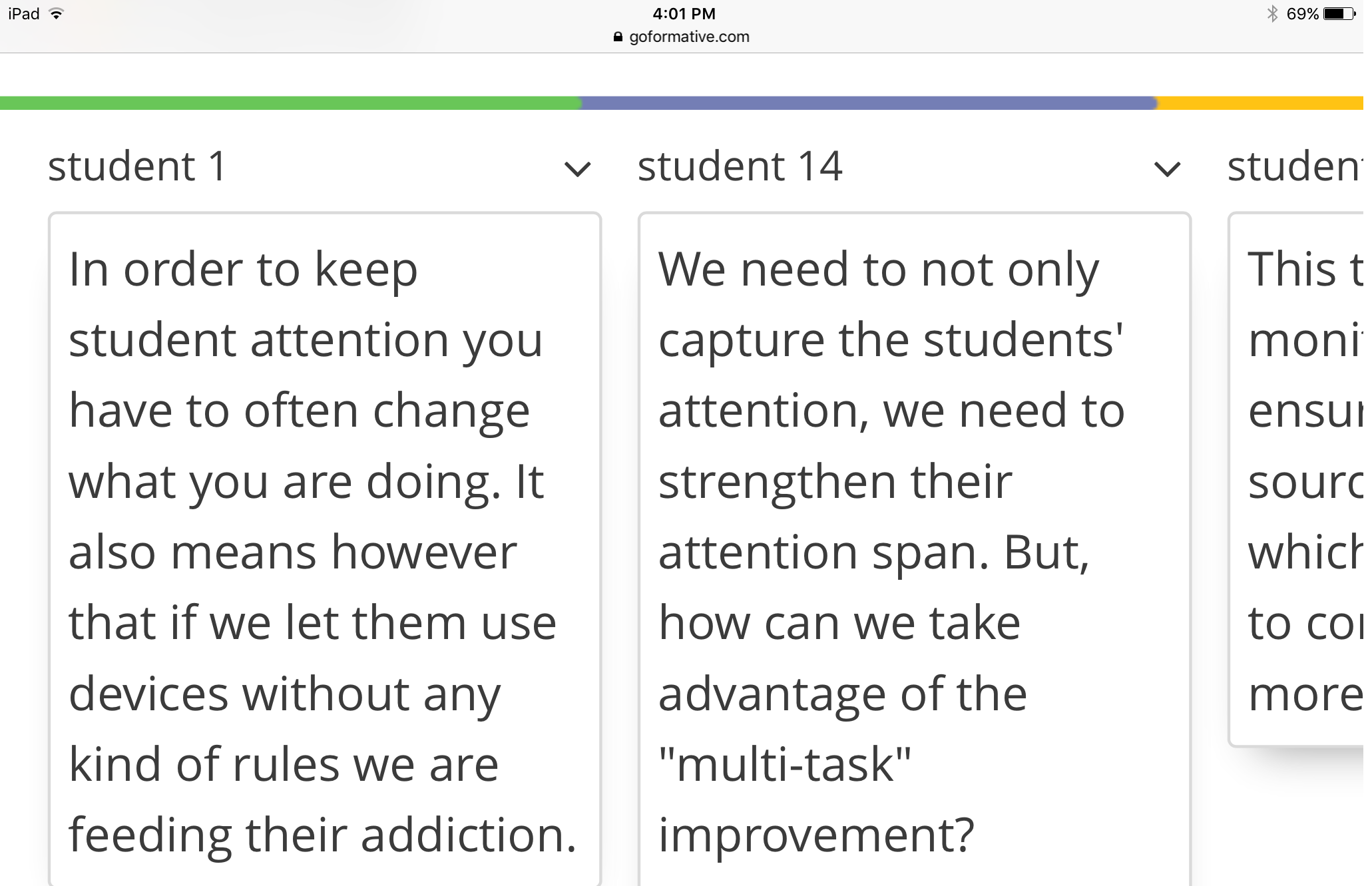 As for the tool I selected, GoFormative worked well for gathering and sharing thoughts, as well as promoting discussion.  Access struggles to the website were minimal and the teachers were engaged by the tool and read and participated.  The teachers also commented that they appreciated learning about and experiencing the tool.  Due to a lack of time, I introduced the mission statement prompts and moved that portion of the lesson to the next session.

Reflecting between lesson segments, I decided that it would good for teachers to hear the voice of district students regarding technology use.  The student piece was not in my original lesson plan, but it would add a first-hand dimension to the discussion.  I have prepared a five-minute video of fifth grade students discussing how and why they like using computers in their classroom.  The video has students from two schools in four different classrooms that have had one-to-one access since November.  We will watch this video as a discussion “hook” for the second session.  Following that, I’ll share some sample vision statements from other school districts.  As planned previously, pairs will record their answers to the two vision statement questions on a open visibility Google Slidedeck.  Knowing the participants more, I envision that the time allotted might not be enough again.  I’d like them to be able to more easily see each other’s responses and collaboratively interact (comment, edit, suggest) and also draft their own missions statements in the same document following the session.  Thus, Google Slides is the choice for this work.  To ascertain which vision statements the committee feels are the strongest, I’ll use Socrative’s vote system.

The ASSURE Model (Smaldino, 2012) helped make this lesson a success.  Clear objectives are an excellent foundation for any lesson, but careful selection of the media, technology, and tools to be utilized (U) for the lesson is critical.  The R in ASSURE stands for require learner participation.  My selection of media, technology, and tools generated participation throughout.  The GoFormative activity let everyone go at his or her own pace, yet enabled everyone to have their ideas heard by others in a relatively short amount of time.  It also captured the responses that I could look at them later to inform my future instruction.

Research by Stephen Sorden (2012) supports careful media, technology, and tool selection as well.  He has thoroughly researched the works of Mayer, including Mayer’s cognitive theory of multimedia learning (2005).  I believe my lesson followed several of Mayer’s advanced principles for multimedia learning that Sorden references.  These include:  people learn better when involved in collaborative online activities, people learn better when appropriate navigational aids are provided, and people learn better when they are encouraged to generate self-explanations during learning.  The thoughtful consideration of student needs and planning of technology, media, and tools relates directly to participation and, in turn, learning.  In my lesson, I found that thoughtful and thorough media, technology, and tool selection, in relation to the lesson objective, was the key ingredient to success!

One Response to Thoughtfulness: A Key Ingredient in Technology Integration